Currently, the Internet of Things (IoT) has become a popular term. Almost every electronic device is connected to the Internet and used by people. It is called the Internet of Things. It contains a list of applications ranging from smart home appliances, cars to wearables, and this list continues to show explosive growth. However, this kind of growth has brought about its actual challenges and it needs to find a solution.

Smart, connected devices, and the Internet of Things ecosystem, they are helping to create and work to change everyday life. For individual consumers, it may mean making everyday tasks more effective and cost-effective, making them safer, and even helping to ensure that they lead a healthier life. For businesses, the promised technologies of the Internet of Things have significant advantages in automation, energy efficiency, asset tracking and inventory control, transportation and location, security, personal tracking, and energy saving.

However, in order to realize the networking of billions of devices, designers must overcome major practical challenges. Some of these are critical, such as improving the energy efficiency of IoT devices, dealing with incompatible interfaces, and providing a way to handle growth paths to deal with unavoidable device performance growth requirements. An FPGA-based design methodology can help solve these challenges.

The Internet of Things is a powerful concept with the hope of literally changing the capabilities of social life and work. In fact, at present, many areas are developing towards the Internet of Things, which will make many things look very different from today. They are only part of the consumer's perspective. For example, a wearable device like the Nike FuelBand often requires eight or nine components, including a processor, wireless module, memory, display, eight sensors, and a USB interface. In the next few years, the number of components may decrease, but the complexity and number of transistors for three or four remaining components will increase rapidly because more memory and processing power are required, and the corresponding screen resolution The rate and brightness increase. Realizing energy efficiency to make IoT devices run on single cells for many years is not an easy task. It requires the use of low-power components and a more efficient power system. Moreover, it will require corresponding improvements at the architecture and chip level.

Today, the design focus of almost every IoT device is focused on ensuring it is as energy efficient as possible (Figure 1). For example, for a smartphone, this may mean (too much better than now), but this will not happen overnight. Instead, it reacts individually to several generations of products and optimizes them step by step. The IoT device should first ensure energy efficiency at every level.

Most IoT applications require "always on". In the simplest case, the Internet of Things terminal is in standby mode, waiting for some people to interact to wake it up. However, if an active processor is used to monitor the user interaction device, the device will consume a lot of power. The main processor, the processor core in the wireless module, is the consumer with the highest energy consumption as well as the display. Therefore, in the Internet of Things terminal, the most unique solution must be adopted to minimize power consumption.

There is an "always-on" solution that uses a small, low-power FPGA to monitor sensors, buttons, and even voice commands. The processor and wireless module display the standby mode until the FPGA determines that the user needs to "wake up" the terminal to provide services. In addition to low power consumption, this architecture differs from power management in other modes of state. Other devices are actually on-line or off, and it is a sleep or partial wake-up that enables the processor to dynamically move from one stage to another. This method significantly saves power, resulting in longer battery life, longer display life, and lower heat radiation.

Any IoT product contains several subsystems with unique features. Depending on the requirements, there are many different component options for each subsystem. However, in many cases, designers can only be forced to select components that are completely based on interface compatibility.

For example, the core of IoT product design can change the allocation of processors, but in terms of time and human resources, due to the need to restructure the code, with the new features, it requires very expensive testing and certification. However, if you want to change a new wireless module, because it is cheaper or has some new features, but it needs to use a new serial interface, your processor can not support, choose to change your processor, or find A solution to maintain these two interfaces at low cost without increasing the original capacity? Fortunately, there is a solution: use a very small, low-cost FPGA bridge interface.

At this stage we have a bridging reference design with many different interfaces. These FPGA-based solutions, such as image sensor interfaces, do not support SubLVDS, CSI-2, or HiSPi processors, or a low-cost implementation SPI with only one video output display for a processor. FPGAs can solve this problem and still maintain cost savings and form factors. Some examples can be seen from Figure 2 to Figure 5 below. 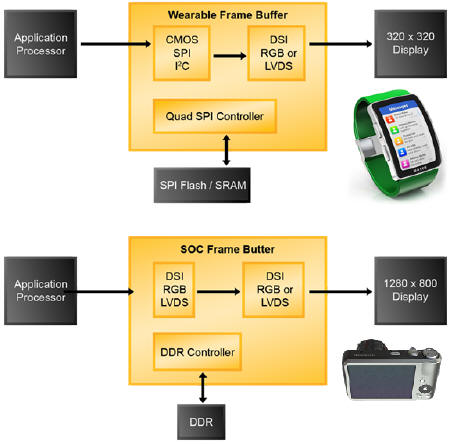 As the saying goes, the only constant is change. This is quite true in all electronic products, including those that involve the Internet of Things. This change in most electronic products is the nature of additives - adding new features, new interfaces, more memory, larger displays, improved wireless modules, and new sensors. Such migrations from a generation of product families often require migrating to a larger, more powerful processor to accommodate additional iOS, higher bandwidth, and new interface standards.

However, there is another option - the FPGA processor. A low-cost FPGA can be used to add and complement the requirements of many processors, allowing designers to keep existing processors while minimizing the impact on the firmware. This partner FPGA can expand the number of iOS, control a new kind of instruction, bridge the new serial interface standard, or add more sensors by extending the I2C and SPI serial ports. Here are some examples of Figure 6 and Figure 7. 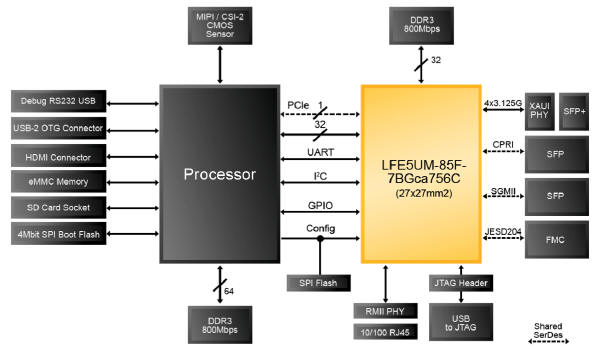 With the development of the Internet of Things market, we will face a large number of intelligent and unique interconnected device challenges. These major design challenges include energy efficiency, interoperability between different interfaces, and new processor compatibility. However, addressing the most common design issues can be solved with programmable logic devices such as FPGAs, which provide an ideal solution for low cost, small size, low power, and IoT application solutions.