In order to meet the challenge of mobile phones transmitting high-definition cameras, a USB audio and video class needs to be defined in the USB standard to regulate the USB-over-USB technology.

HDMI is one of the best standards for high-definition video today. By the second quarter of 2009, more than 850 companies had obtained HDMI authorization.

In-Stat once predicted that in 2010, more than one billion HDMI-enabled devices were on the market. These devices include HDTVs, projectors, and handheld devices such as media players and mobile phones. HDMI (below Figure 1) uses three TMDS (Minimized Transmission Differential Signaling) data channels and a separate clock channel to transmit uncompressed audiovisual signals up to 10.2 Gbps (3.4 Gbps per channel). With this bandwidth, HDMI supports more than 1080p data streams, which has created a digital three-dimensional experience. 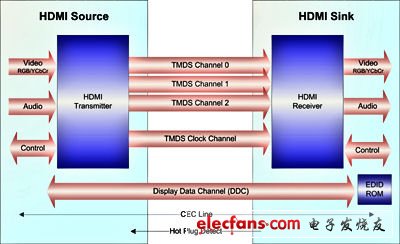 At the same time, DisplayPort, another high-definition standard, is rapidly penetrating the market. It has strong support from manufacturers such as HP, Dell, and Apple. In the DisplayPort core, audio, video and embedded clock signals can be transmitted through the scalable 1, 2 or 4 channels under the micro-packet architecture.

As shown in Figure 2, the original data stream is well packed and transmitted via the data channel through pixel control and addressing. DisplayPort1.2a supports a bandwidth of 17.28 Gbps.

Through capacitive touch technology and a user-friendly design, Touch Interactive Advertising Player foster a comfortable, easy-to-navigate digital writing experience. The interactive displays can accommodate up to 10 unique touch points while maintaining the smooth.

and the product features mainly include display and search.

It is easy to install, can be widely placed in supermarkets, shopping malls, exhibitions, business halls, etc,