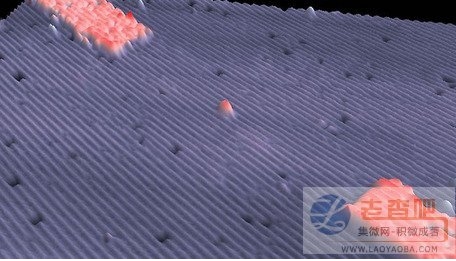 Australian scientists say they have developed a single-atom transistor consisting of a single phosphor atom etched in a silicon crystal, with gates controlling the current and metal contacts at the atom level, which are expected to become the basic components of the next generation of quantum computers. The study was published in the February 19 issue of Nature Nanotechnology.

In the latest research, scientists used a silicon wafer placed in a vacuum to make the single-atom transistor. In order to observe and manipulate the atoms located on the surface of the silicon wafer, they first cover the transistor with a layer of unreactive hydrogen atoms, and then use the ultra-fine metal tip of the scanning tunneling microscope to precisely select certain regions of hydrogen atoms to be selective. The ground was removed, exposing two pairs of mutually perpendicular silicon ribbons plus a small rectangle of six silicon atoms located at the junction of these silicon ribbons.

Scientists said that this is not the first single-atom transistor, but the new transistor can be placed more precisely, which makes it more useful.

According to research leader Michel Simmons, director of the Quantum Computing and Communication Center at the University of New South Wales, â€œOur newly developed equipment is perfect. This is the first time that scientists have demonstrated that they can handle very precisely on a single pedestal. Single atom."

From the electron tube to the transistor to the integrated circuit, the smaller component volume has always been the goal pursued by computer engineers. Today, scientists only squeeze more components on silicon chips and build more logic circuits in a limited volume to have faster computing speeds. Single-atom based transistors undoubtedly give people reason to expect smaller, faster computers. More importantly, the success of Australian scientists is more derived from accurate design than luck, which makes the reproducibility of single-atom transistors much more likely to go beyond the laboratory.

Is your battery draining quickly? Does your battery percentage jump?
These are signs of a worn out battery. All lithium batteries, today's standard battery type in electronics, wear out with time and with use. A drop in capacity can usually be noticed after six months. After 12 months (~300 charge cycles), it's common that the battery has lost 10-30% of its original capacity. Eventually, the battery will fail to keep the phone running stable and the phone could shut down in use or in standby mode.